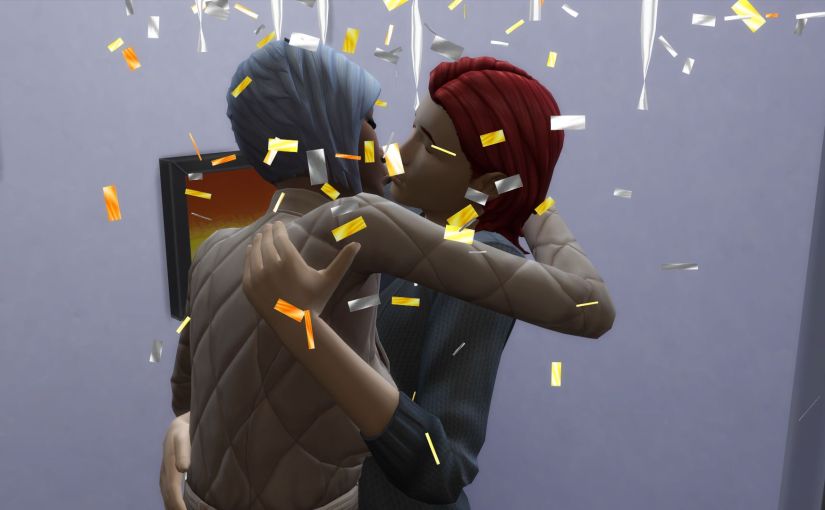 Now that we have met the family it’s time to get Charlene and Garrett together and start having the babies they will need.

Since Charlene is going to be spending her days painting, taking care of the kiddos, I decided to have her start a small garden. They only have about 9 plants and I don’t think we’ll do much to get any more.

These two are going to take a bit to get together. I thought since they both have some creative inclinations they might have better conversations, but it’s hit and miss for a while there.

Charlene gets going on the painting and starts filling the house with small painting she has done, selling ones I either don’t like, or make duplicates of. The house has Home Studio as one of the traits, as well as Great Soil and Child’s Play.

We had a good evening where we the young couple was finally able to get themselves up to where they are flitting away. Charlene’s sexy pose was pretty cute, made me giggle.

A first kiss was had pretty soon after this, which was a great step forward. These two are going to be very cute. They were friends first, and this is good since we have one bed.

The two of the agree to become boyfriend and girlfriend as well. It’s very exciting, and while we have not touched on it in pictures Garrett has been working on his writing.

I don’t believe I have actually mentioned what makes up the characters of Charlene or Garrett Coloure, so let’s remedy that. Charlene wants to be a Painter Extraordinaire who is Erratic, Music Lover, Creative, and Muser. Garrett is wanting to be Bestselling Author, so he is also a Muser, and then Geek, Neat, and Ambitious.

We have Charlene paint while she is feeling very flirty and the result is adorable. I love the fact she made what looks like a cat version of Lady and the Tramp.

After Charlene finishes up her painting and Garrett works on his first book they are going to finally have their first night together, and the ghosts come out to chat. This is great-grandpa Asher and then grandma Amie in the background. Charlene looks like she’s begging them to go away.

While the young couple enjoys their night the ghost chat and break about everything they can. Amie, why are you complaining about the mess, you are the one that broke everything?

The next morning Garrett is back to being hard at work on writing and Charlene was still feeling flirty and painting another flirty picture. This one I hadn’t seen yet, and it’s super cute. We hang it on the wall in the bedroom.

To help with getting Charlene her next milestone level she needs to visit a museum, so while Garrett is off at work, she heads to the museum.

It’s like the children know what is coming our young Charlene’s way. These two kids headed over to talk to her almost as soon as they came on the lot. She had a little conversation with each of them and then headed home.

Garrett comes home with a promotion, which brings in some extra money, and that’s great. It’s time to get these guys ready for their goals of this challenge.

Garrett takes the chance, and of course Charlene says yes. They have been love birds for at least 24 sim hours now, so it’s love of course.

As soon as she said yes, she did this autonomously, which is just adorable. They may have taken a little time to get here, but much like in real life a little time helped them build a really strong relationship.

That evening mom and dad came out to talk with Charlene. The house is beginning to look more and more decorated as Charlene paints away and we keep some and get ride of some each time. She’s up to 6 excellent paintings already, and doing good so far.

The next day passes much the same way, and when Garrett gets home from work they “elope” in the bathroom. Because, #simslogic, and after this little “ceremony” they use the shower for…other purposes.

Which leads to a success. The first of 14 babies are on their way. Charlene will need to spent more time painting and Garrett writing so we can make more money for the family to expand the house.

I’m going to leave this update here, I know it’s a little shorter, but since you had the introduction as well, hopefully you will forgive it. I will give you the entire pregnancy next update and we will see what the first babies look like genetically.

A place for me to put my TS3 and TS4 stories

A daily selection of the best content published on WordPress, collected for you by humans who love to read.

A place for me to put my TS3 and TS4 stories