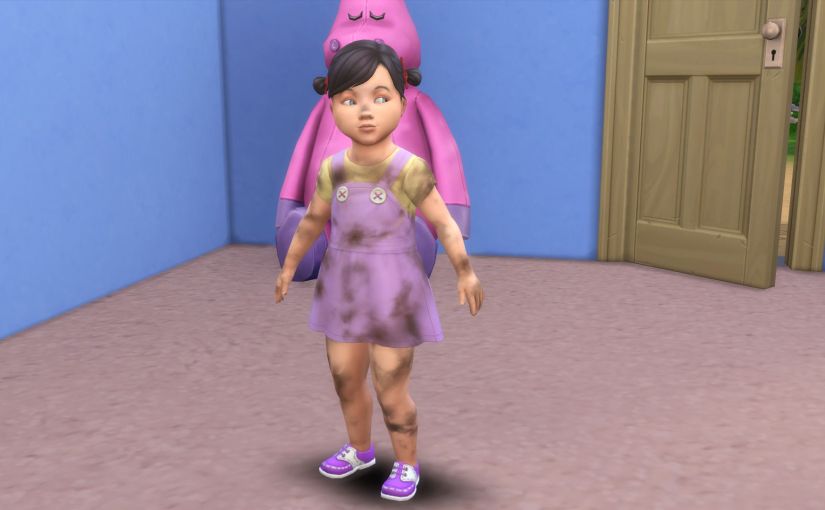 We are back again and about a 1/3 of the way through our updates for the month, and wouldn’t you know, we are also about a 1/3 of the way through the month, so we are right on track so far! I think I initially miscounted on the posts I was going to do, but then realizing I posted that one post “early” and that threw it off, so my goal was 15 updates, but now it looks like I’ll get 16 in, which is great! All right, enough rambling by me. Let’s get to our goals:

So we were able to add a skill maxed, another pregnancy marked off, and the Selvadorada spouse achieved. So let’s see how the family does now and what the newest baby will be.

We start off to a great start by having Desiree come in and break the dollhouse, which Blossom fixes the next afternoon since we have a new baby on the way and the girls still use it too.

Brook works on finishing up all of the bed upgrades for all of the beds in the house. I believe they are fully completed, but there might be one or two that need something. This should help us all get good amounts of sleep and rest and comfort.

Fabiana is a great mother and the girls enjoy bath time with her. How they manage to get so dirty so quickly is mostly beyond me, especially since they don’t play out in the dirt very much, but oh well.

All the work on the beds has managed to get Brook a maxed out skill. That’s another skill down, only 31 more to go. I don’t think there is anyway I’m maxing all of these skills, and the number of them just keep growing too, but I’m doing my best. We’ll see how it goes.

Void: What it was going to miss your mouth completely….

So I know the familiar really didn’t eat it, but that’s what I feels like happened to me.

Just a quick picture to show that we have added to our buried treasure collection and we are getting closer to finishing it. This one has been the hardest to finish. I find treasures frequently, but they are just the same ones I already have. I’ll keep trying though.

Blossom completed her aspiration. That’s another one down, and all I need her to do is finish up her career, which isn’t happening very quickly. I keep hoping, but so far, no such luck. I’m about to break down and buy a well to help out here. Still, finishing this aspiration has been great. Her new one is World Famous Celebrity, which I had initially made Brook, but she got changed to Painter Extraordinaire, since she still has paintings to do for work.

Such a dirty little girl, but she is adorable all the same. Still, I really would love to know HOW they get so dirty so fast. It feels like they need baths all the time.

Blossom went to repair the speaker at noon, there was the speaker and a couple of plumbing items that needed repairing. Instead of repairing it, she managed to catch the speaker on fire and couldn’t manage to put it out. Not only did it ruin the speaker, it burned up the archeology table, and on the other side of the wall got the fridge and magic mop. Thanks Blossom!

It’s crazy for me to believe it’s already the twins birthday, and the new baby won’t be far behind either. Olive brings Lavender to the cake first, and then Fabiana gets to bring little Lily over next.

Here they are after a bit of a make-over so they get their colors once again. Looking at them in CAS with the same hair style, the eye browns are different, and that’s basically it, so they are essentially identical. Lavender, on the left, rolled Geek for her first trait and she got Social Butterfly. Lily, on the other hand, rolled Art Lover for her trait and rolled Whiz Kid, because of course. Both girls got the Top-Notch Toddler trait and both are spellcasters.

After joining the scouts Lily gets right to work on her homework, and you can see we replaced the burned items as well. Oceana enjoys a piece of the cake Olive made for the girls. We don’t have many sweets around right now, mostly salads to try and help Olive with the weight loss goals.

Late that night, or rather probably early the next morning, labor pains strike Olive. Fabiana of course comes along, and is panicking by the time they reach the hospital. Olive is a little frightened, given how her first pregnancy went during the actual birthing machine process.

When she lays down and the machine covers her Olive makes this series of faces. I think she is remembering and keeping a close eye on those arms and as soon as one moves in she is pretty freaked out. I don’t blame her one bit for any of this, especially when we learn we have an intern.

Thankfully, and amazingly, everything is very smooth this time, and the only thing removed from her body with this little angle of a girl who gets the name Petunia. Petunia will be our bad apple of this gen, which I always feel bad assigning, but I just have the feeling if I give the game room we will end up twins again.

Back at home, this is a fairly traditional sight. Oceana is working on potions, and she is close to finishing her aspiration. As soon as someone gets low on plentiful needs potions we are brewing up another batch. Those things are great in this house!

The next morning I remember to have Olive fuse a relic together and then she adds the gem. All that’s left now is to use it on someone outside of the family. This should be a blessing relic, and provide money to whoever we use it on. That feels better than the curse to me as a general note, especially since curses can spread.

After school the girls are usually pretty unhappy and so they take some time to build a sand castle together. I do love this interaction and it provides so much fun is great. These two are pretty close and it won’t be hard to make them best friends for Lavender’s aspiration.

One of Fabiana’s requirements for work was to give the gift of produce to someone. So she takes some of the strawberries and gives them to Olive. I worry this will be disappointing, but instead Olive laughs and it’s a positive experience all the way around.

Brook begins working, in earnest, on her aspiration. Holding a Meet and Greet at the local pub one night, and traveling to a celebrity hot spot the next day. I bring Olive along, who reverts back to her hospital gown for some reason and we hope maybe a couple of people will ask for a selfie. We do, at least, get to deal with the paparazzi.

After changing back into normal clothes, Olive takes the opportunity to use the blessing relic on this fan. It feels good to bless someone and hopefully the fan will be thankful for the money. That marks off most of Olive’s requirements, just the pregnancy and to finish up her aspiration now.

I did a little rearranging of the living room as the TV broke and I was tired of the tiny TV they had, so we got a nice stand and a nice TV, but to allow it to fit easier we moved it again the wall that a couch use to sit on and reorganized the room a bit. We are going to have to add on another level to the house soon.

Back at home, life continues pretty much how it has been. Olive continues to work out and has been doing great, she is noticing the progress for sure Fabiana has taken over running the yard sale table once in a while. Not that the family needs much in the way of money anymore, but it’s fun all the same.

Then it’s Oceana’s birthday. Hard to believe she is an Adult now, but that’s what happens as life moves on. She is so close to finishing up her aspiration and so while the party rages on and lots of fun is had, Oceana heads off to work her magic, and has begun teleporting everywhere.

And she does it. She is now a top ranked magic user, although she can continue to level up for more points to spend. She changes to Computer Whiz as she has a job as a Tech Guru, which I cannot remember if I mentioned before or not. So hopefully she can get through everything soon. However, I believe that is a good place to stop this update. It’s a little bit shorter than I have been doing, but I’ve played ahead enough and there is a lot to cover next time. So see you in a couple of days!