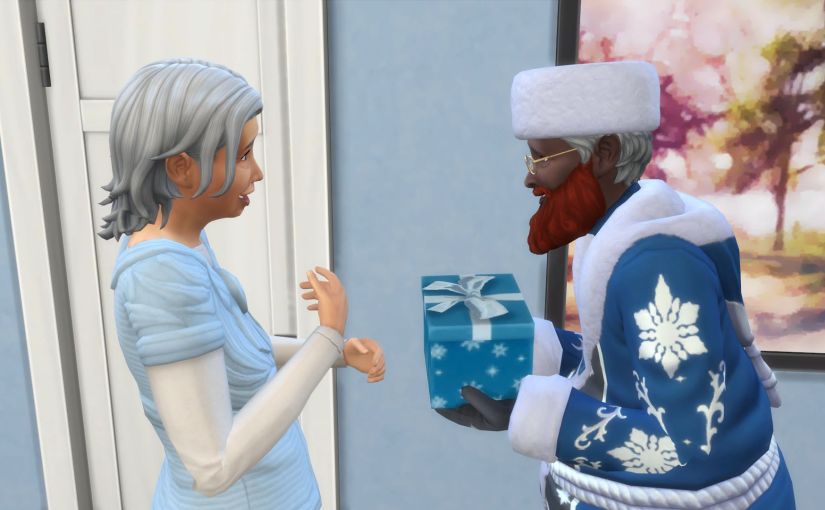 Hello and welcome back to another entry in this Alphabetcy/ISBI! We are getting closer to generation C taking over, and man, when I think about the fact there are still 24 generations to go it’s insane. Why did I do this to myself??? Anyway, let’s check in with the family, shall we?

We start with Bailie drinking her one and only youth potion. I was getting notices about it almost being her time, and we still have multiple days before Calvin is ready to take over, so while I know she’s ready to go be with Adalyn, we can’t lose her quite yet.

Bailie then goes and starts working out. I keep a close eye on her, because while she needs to finish up the bodybuilding aspiration I’m also not about to let her die from working out too much.

While Bailie was working out Calvin came out and started working on one of the multiple school projects he and his sister have started but never finished. I wonder if anyone will ever finish them if I just leave them out?

Bailie is also still working on getting to the top of her career. Not that it’s critical, but if we can get her through this it will help. She is confident after her workout and decides to write this fun title.

And just because I think they are fun, here is a list of books Bailie has published. I did name most of these, and one of my favorites is the workout book Sweat it Up, Sweat it Out!

And then Bailie did it, she maxed out writing. Not that it provides us any points since she is the TH, but hey, I’ll take what I can get as it means we might be able to get her through some new aspiration levels depending on what we get for her next one, if we do.

One of the twins is over, I cannot, for the life of me, remember which one this is, but Calvin and Bailie are always happen to have any of them stop by the house.

Bailie then goes around and starts upgrading the beds. She doesn’t have enough handiness to do both upgrades, but we can at least make most of the beds more comfortable.

It’s Winterfest for the family and we have split the holiday into two days. I stole it from IllusoryThrall and if you don’t read her blogs or watch her stream I suggest you start! 🙂

Winterfest Eve is made up of decorating the house, putting up the tree, Father Winter coming (because of course he comes BEFORE you open presents Winterfest morning) and attending a holiday service. It was a lot of fun to allow them to decorate and have Father Winter arrive while they were starting to get ready for bed.

Father Winter then proceeds to go outside and find some spoiled food that I didn’t even know was there, it was probably Calvin.

You’re the one that keeps testing me by cooking.

Anyway, he also changes into swim trunks and sits by the pool. You can tell his arm also glitched into his stomach making him look REALLY weird.

Then I learn that APPARENTLY I missed a marriage notification for Brodie. He is married and is now expecting a new little Otts! I also noticed that Bryce is now gone and I missed his death notice. Britta has also gotten married, which means I forgot to go flag her, she is Ariana’s daughter. We’ll go check that she won’t have kids.

The next day being Winterfest means we invite over all the kids and Brodie as well. We have everyone over to open presents, have a grand meal and then play games together. It’s a wonderful Winterfest and I really like the split, so I think I’ll keep it and put it in more of my challenges like this.

Right after Winterfest is done we are told that Brodie is now an elder. That means he’s not likely to see his child grow up to adulthood, but hopefully his wife will be around for a while yet.

Calvin gets energized and decides to go work out. He has had a pudge for quite a while, so it surprises me a bit, but I’ll take it. It’s rare for me to have super in shape sims unless they have the athletic aspirations.

Then we get some great news! Bailie has maxed out her fitness skill! No, sadly, this still doesn’t provide us any new points, but it’s a feat nonetheless, especially since she is lazy.

But even more importantly it means that Bailie has completed her aspiration! That’s right, the lazy sim who helped us lose so many points during her toddler years, but also stole my heart, has finished the bodybuilding aspiration. That is +15 points! Way to go Bailie!

With that, before anything can go downhill again, we are going to wrap up this update. I know it’s a little shorter than I sometimes do, but I don’t dare tempt my game since we gained some points. Next time we will probably see Calvin grow up and take over the reigns as our new TH!

Right before I go though, here is Brodie’s new step-daughter, Brynlee, and his wife Cora. Then we have Britta’s new husband, Douglas. I’m hoping we will see Cora and Brodie’s newest baby next time as well. Let’s look at the points! We are ALMOST at 200 guys!!! We have actually made up for last generation. It’s very exciting!