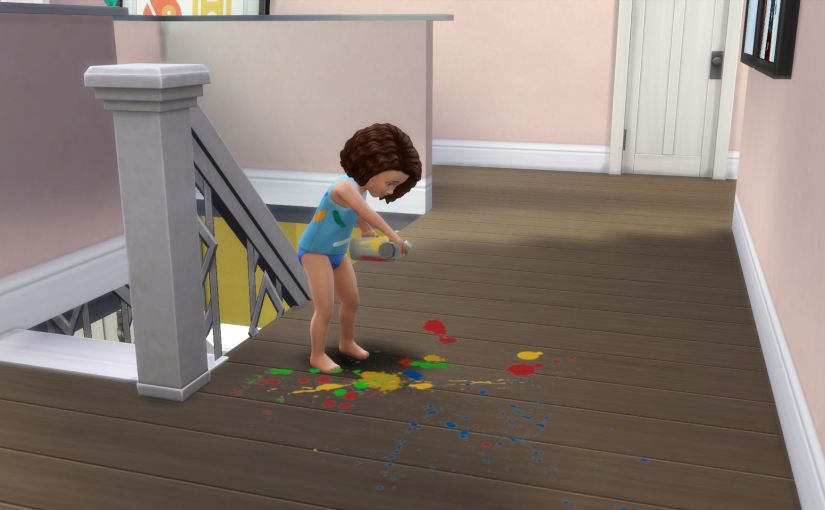 Welcome back to the crazy, I mean the Otts….right. This update was admittedly a bit frustrating for me to get through, play wise. The family seemed to glitch out a couple of times and caused some issues, and I had to replace some items, but let’s get started and I’ll tell you more as I go.

So to begin with, the family moved!!! I grabbed this house from the gallery, cannot remember who made it, but it was for a 100 baby challenge, and I edited it up a fair amount. Turns out moving was a bad idea….well the moving part wasn’t, but I should have checked on people before I did it.

The twins were tired and hungry, both in the deep red. This was not the only time this happens….something broke guys. Anyway, since the twins were in such bad shape Adalyn and Bailie kind of “fought” over them. One would try to feed then, one would try to put them to bed. We were starting to put them to bed, then they would go grab popcorn. They didn’t seem to raise either hunger or energy, so I ended up resetting both of them and it seemed like it got better. However, -15 points for us here (not as bad as it could have been though!)

Baily works on getting the twins to bed. She and Adalyn are also in really rough shape. No energy, very hungry, no fun. It’s a bit of a mess to start with this family.

Of course, right then Adalyn let’s us know, she’s in labor. Oh yeah, that’s another reason we probably should have waited to move. Oh well.

We send Bailie with her and she instantly goes to nap in a chair. At least it’s not passing out. This is good for the twins who go to daycare and get most of their needs met.

Back at home Adalyn stays in her hospital gown (who knows) and has a dance party with her boys. These two really are cute, and now that they are doing better needs wise, we can have fun with them again.

Corey is apparently the mess maker. Although, Cedric gets in his fair share as well. Corey isn’t looking like he’s going to get time to get Happy Toddler, the beginning of this update with everything really hurt that.

Adalyn is still a good mom and tucks one of the boys in. Cordelia is getting a little ignored, and I feel kind of bad for her. It can take a while before she gets what she needs.

Awww, Britta is now a YA. We will head off to flag her soon. In case you don’t remember, she is Ariana’s only child. So funny to me that Ariana’s child is just becoming a YA. Meanwhile Bailie has been a YA for a bit, and already has kids.

Oh boy, I’m failing at watching. Adalyn had her birthday. I totally forgot that Adalyn was bubbling when she got pregnant with Cordelia. Sorry honey! Luckily she didn’t seem to mind too much.

Bryce has also grown up to an adult now. Neither he nor Brodie seem interested in starting a family. Who knows it might still happen later, but for now they are happy bachelor’s.

This poor house is a mess. You would think we could have kept it a little clearer after being here like….less than a week, but no. It’s a disaster, just look at that pile of dishes.

Oh boy, time for everyone to be sad again. Arthur finally went. His youngest is at least a teen, and since they are vampires they are going to be around a long time.

I am bound and determined to get one of the twins Happy Toddler. They were on track to both get it before I moved the family and we had the big mess that was the beginning of this entry. So on the upstairs landing Bailie works flashcards with Cedric…which I think he even asked for.

Then he plays with Adalyn and the dolls. I believe this got his imagination up to level 3. We are getting close. I think all he needs is to finish potty training and getting some thinking. That is the hardest one to do in an ISBI.

Oh, whoops, I lied before. Now Arthur’s youngest is a teen. Getting my timeline a little off, sorry about that. Brooke looks the most like Arthur I think. We’ll see her at the end of this update.

Bailie works potty with Corey, she also does with Cedric as well. They will be fully potty trained!

Cedric as done it! He maxed the potty skill! +5 points for us! Now we just need to finish thinking. He’s also close to maxing movement as well. These two wild toddlers run around here like crazy.

I know this looks quite a bit like Corey, but this is actually Cordelia all grow up into a toddler. She is STARVING and upstairs, but her parents are fighting to get the twins fed and to bed downstairs. She rolled Clingy…that should be fun.

Bailie helps Cedric with the slide, it takes like 4 times to get his movement maxed out. That our little wild naked sliding toddler! That’s another +5 points! At least the twins are making up for the point losses earlier.

Awww, Bryce and Brodie might not be having kids yet, but Adalyn’s sister is. Rosalie, you might remember, came by and visited the twins right after they were born. That’s been the only time she’s been over. Once things have calmed a little here I would like to invite her over.

It was time to go flag Britta. It took us a while to get here, what with the kids and the weird glitches. Neither Britta or Bailie seem to like the idea of flagging her. I don’t care guys, all it takes is one of you to get super procreative and we have Otts all over the world.

So I was a horrible watcher and the boys grew up without cake. Neither seemed to mind too much, I think everyone is simply happy we survived the move. So Corey is in the green jacket. He did max out his potty skill, so that’s another +5 points. Corey got Art Lover and wants to be a Rambunctious Scamp.

Cedric is next, and he managed to get Happy Toddler right towards the end of his toddler years. That’s another +5 points. Cedric got Glutton and is trying for Whiz Kid.

Finally, in the blue sweater is Cordelia after a bit of a make-over. As I said before, she is Clingy and will also likely be a handful like her brothers. All of them are super cute though! I don’t know if these guys will have any more kids. Part of me wants more, I think they make adorable kids, but part of me doesn’t want the hassle.

I think that’s actually where I’m going to end this update. I think, even though we started out pretty rocky, we got everything mostly under control again. I didn’t mention, I had to replace Bailie and Adalyn’s bed as neither was gaining any energy sleeping on it. Once I replaced it, that stopped being an issue. Something bugged out pretty bad, but things seem to be under control now, which I’m glad about.

The twins managed to make up for losing the initial set of points they lost us right after the move during the glitch. With the Happy Toddler and birth of Cordelia we are actually gaining a little more points again.

This is Brooke, Arthur’s youngest daughter. I really can see Arthur in her for sure. She is a Genius who is also Erratic. That seems to make sense to me. Until next time I hope you enjoyed this update and we will see you soon!