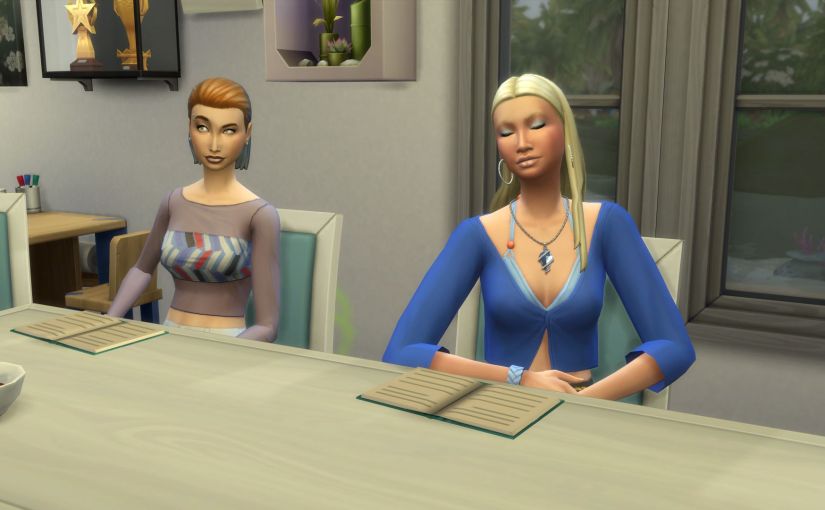 Hello and welcome back to the Latte’s. Last time with the family we welcomed the final member of this generation, Xjavier and we are likely ending this update with a new heir poll! Super excited to see who everyone chooses, I think it’s going to be a hard choice.

The eldest girls are working on homework and other skills today while hanging out. This family has always been so close, and I think they are going to continue to be super close this generation.

So it’s almost birthday time and we invited a lot of family over, one of them being Orion Straud, who burned up in the setting sun. Easton went out to plead for Orion’s life and Grim actually listened. I wasn’t sure if it would work and those cousins are going to be around for forever.

Back to the birthday, it’s actually a double birthday. First up little Xjavier grows up into a toddler, and we will see his make-over in a second. Then Easton brings little Ijtiba to the cake and he grows up into a child.

Amarja puts little Xjavier to bed and the girls are already getting a head start on taking care of kids. Not sure who will end up heir, but both Hjordis and Amarja are great with the younger kids.

After a bit of a make-over here are the two youngest boys in the family. Xjavier is, of course, on the left and is another kid that looks a lot like Easton. Ijtiba also still looks a fair amount like Easton as well. Xjavier is an Inquisitive toddler, and Ijtiba got the Glutton trait and managed to get Top-Notch Toddler.

Horjdis is trying to finish up the scouting badge and so she heads out to fish. Additional kids also came too, and I think they were additional cousins, but not 100% sure who all came with us.

We then get some family updates. Ivan is now a young adult, which means it’s time to go flag him. Since I barely remember who Ivan is I’m would imagine you don’t either, but Ivan is Nick’s son. Nick being Zophi’s brother. Pixey, Halix’s sister, had a baby (her second) and named her Isabelle.

Zophi got invited out, I believe to a nightclub, but she meets up with her twin, Zorah, and her last living sister, Ember. We are going to be losing Zophi soon, and while I will miss her, she has achieved much for this challenge and I’m sure she misses Harvey.

Monday comes and we all know what that means. It’s school project time. Each of the kids pulls out their project and works on them on the beach, finishing them up. Hjordis will be happy to be done with school projects soon.

We get a tiny little family update and see that Arthur is now a child. Arthur is Zax youngest child. The extended family is likely close to being done with growing, other than if Ixael gets married.

I know I say this nearly every time, but I really love this family. From homework, to dinner time, to TV watching they all spend so much time together and seem to really like the time they spend with each other. I also adore the genetic diversity we have in this family so far.

Also, Easton makes the best faces! I’m not sure what he’s surprised by, or excited by maybe, but this face is just too great. Love them so much!

However, then the day I knew was coming, and was mostly prepared for came. It was Zophi’s time to leave this world. She had completed her aspiration, her job, raised her kids, and been a wonderful grandma to all of her grand-kids. See you around Zophi, please don’t break all of our stuff.

It is almost her birthday and Lowitja just finished up her aspiration. We kind of forgot about her aspiration there for a bit and didn’t focus on her as much as we probably should have. She gets the Artistic Prodigy aspiration next, but isn’t going to get a chance to complete it.

Apparently, all of the kids and family members were born right around the same time as we get a huge rush of family updates right before birthday’s around here too. Isabelle we saw born to Pixey earlier, Kaylieigh and Robyn (Zax and Oxkar’s wives respectively) turn elders, Paula is Pixey’s other daughter, is not a teen as is Olivia, Oxkar’s eldest.

Then it’s Happy Birthday to Halix, who ages up into an adult. It’s hard to believe she is only an adult, but all of those kids really hold back that age bar. Easton is probably going to have a youth potion when he becomes elder so he isn’t quite so off age with his wife.

Then it’s also little Lowitja’s birthday. We saw she had completed her aspiration and so it was time for her to become a teen herself. She is lovely, although I’m not crazy about that hair on her so she got a bit of a make-over.

Here is Lowitja after a make-over. I know it’s much darker than it was before, but I actually really like this look for her. She added Gloomy to Art Lover as a trait (partly the reason for the make-over. Gotta love those gloomy art lovers.) She also got Purveyor of Potions for an aspiration, which gives her Collector as a bonus trait.

Easton finally finishes up the Bodybuilder aspiration and will now have a long life. Not something he necessarily needed, but being married to a mermaid, who gets super high fitness from all the swimming, it will be nice for him to have it. Next he gets the Chief of Mischief aspiration.

Lowitja, much like her sisters, is already great with her younger siblings. She puts little Xjavier to bed who is working on his skills, even though we haven’t seen much of him this update. The beds are also still a popular place to do homework, or chat, as Halix and Amarja show.

Zophi is out haunting, pretty quickly, and she is out with her mom. Not sure why Kynzie gets so angry as a ghost, but Zophi is able to calm her down. She is happy to see her mom again.

A final little extended family update, and we see that Mikel, Ember’s son, is now a young adult, and Zax’s twins are now teens. The extended family is growing up so fast, much like our current family.

The three eldest Latte children this generation, spend a lot of time hanging out together all on their own. I do not direct these hang outs, they just seem to gravitate to each other.

We end this update with 2 final birthdays. First up is Hjordis, who is officially a young adult, and will either be moving out or taking over depending on the results of the poll. Xjavier, whom I know we didn’t see really at all during his toddler years, is next up and grows into a child.

After a bit of a make-over, here is Xjavier. He grew up looking just like his dad, and his brother Ijtiba. He did manage to get Top-Notch Toddler, even though you never really saw him working on it, and he is Erratic, just like his mom.

With that we are going to call this update, especially as it’s getting a little bit long, and we need to get to the heir poll. It will be up for about a week. Super excited to see who is going to become the next heir.

Before we leave the update, however, here is a look at the current kids who grew up this update. Oliva is Oxkar’s eldest child, next up are Zax’s twins. First Zorro and then Zven. Starting the second row is Paula, Pixey’s daughter, and then Zax’s youngest Arthur. Finally is Pixey’s youngest Isabelle.